This is a github and hardware project using an Arduino UNO board (AVR chip, 2k RAM, etc.) to proxy the MIDI protocol to change the capabilities of MIDI controllers like keyboards, in a format that is similar to guitar pedal stompbox devices. The point is in doing these C++ projects that run under very tight size and real-time constraints.

This pedal takes all incoming MIDI messages and:

When the iPad first came out, I was doing serious iOS music application development. When the iPad first came out, there was no MIDI support available, so Mugician had its own sound engine. By contrast, the app featured here was originally written to use MIDI internally, and was originally targeted to only pair with the app ThumbJam, due to the extreme re-interpretation of the MIDI protocol required to do fretless polyphonic instruments correctly.

Into the first year of iPad, the typical iOS music app had far too much latency to be a viable music instrument (music instruments must be in the 10ms of latency range... 1/100 of 1 second touch to audio response; at a time when 100ms was the norm.). Mugician and Geo Synthesizer were widely regarded as some of only a handful of iOS instruments which could be played at the actual speed that real musicians could throw at it. (Much of this was achieved by avoiding UIKit in favor of OpenGLES2 up until the real-time issue became less of a problem.)

In addition to mobile apps, I did some experimentation on Microsoft Windows with large touchscreens, in this case using OSC protocol rather than standard MIDI: 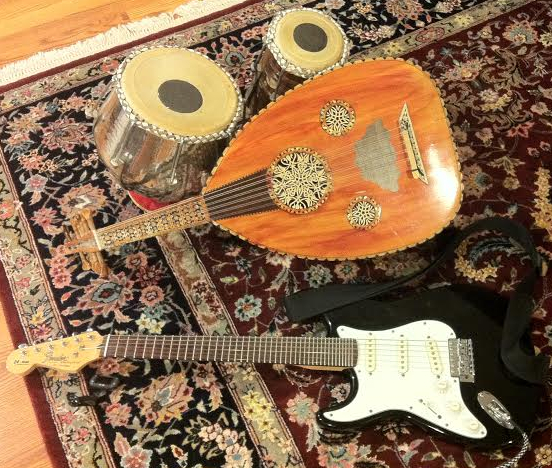 These diagrams give an idea of how quartertone modes work. This is loosely based on Maqam music theory (ie: Arabic/Turkish music). This system has a large variety of scales that are built of smaller chunks, and do not force alternation between major and minor tonalities. The use of quartertones gives a lot more scope for using minor tonalities in more places, along with some neutral ones. The theory I am laying out is however more oriented towards playing heavy metal on a quartertone guitar.

All of these scale diagrams are JavaScript Canvas code (not static images). Feel free to grab the code out of this page to make microtonal fretboard diagrams, as the code is general enough to do this.

When starting out on the root note (E in this case), if we have a Minor Pentatonic backing scale, then we make it Bayati by adding note 1. Being neither Phrygian (ie: Kurd) nor Minor (ie: Nahawand), choosing Bayati picks note 0 as the clear root. From note 0 to note 2, a minor third is being cut exactly in half; something impossible on a 12EDO instrument. It has two medium second intervals next to each other, noted as "MM":

As chord progressions change, the bottom half of the scales (tetrachords) define the notes in use. Usually the scale isn't defined rigidly across the entire octave. The idea is to string together shorter partial scales. In this way, many melodic runs will be full of accidentals, while still having a clear tonal character.

As we move up, we can either do Phrygian on B, or use Bayati on B. In this position, Bayati is picked. Note that it exhibits some symmetry with Bayati on E from notes 3 through 5. Note 4 is a quartertone flat from being a fifth above B (an F♯), so it is clearly connected to E.

We can visit Phrygian on E from D. It has small then large intervals, noted as "SL":

New scale shape Hijaz (Phrygian sharp third). Note that the wide interval is a major third wide. It is so wide, that sometimes this major third might be cut in half into a pair of intervals. It could be: LS, SL, or MM. Using MM would be like Bayati on F!

Following from this position on F - SLS

Note that if rooted on note 1, it's the harmonic minor tetrachord.

Following from this position on F - MMS

Rast is a comon major-like scale (more like Dorian quartersharp minor third). The root note is 0, but there is strong emphasis on 1 and 4. If 1 were the center, it would be Bayati. Notice the pattern of notes creeping up one fret per string. This is useful for visualizing fretboard location

Now, go to Maqam World and read about Ajnas

More generally, the pentatonic core is stable; and other notes tend to move around to suit the circumstances. Note that in none of this have you seen an actual quartertone (1 fret) interval. The harmonics on a string generally dictate where notes will lie, and there isn't a useful second interval much smaller than a half tone (2 fret - small step).

This is another generic shape that arises, which is roughly centered around a Rast tonality. This scale is practically impossible to resolve with non-quartertone instruments playing along though.

Notice that harmonic 5 is slightly flat of the nearby fret. This is why when playing a maj third interval between two strings, bend the bottom note up a little bit until the timbre of the chord cleans up (and the beating goes away). This narrows the distance between the two notes.

Similarly harmonic 6 is slightly sharp of the nearby fret. So when playing minor third intervals between two strings, bend the top note up a little bit until the timbre of the chord cleans up (again, eliminates beating). This stretches the distance between the two notes.

Other intervals like a semitone (ie: an E and F played together) can be made just by bending the F up a little bit to clean up the chord. The locations of the harmonics make it clear what the pattern of adjustments for intervals is going to be.

In books on Maqam, the topic of alternate equal temperments as landmarks comes up. After 24 equal as a useful approximation (for notating notes especially), 53 equal arises as a way to accurately reason about the microtonal details. (See Touma's book "Music Of The Arabs").

Maqam is closely tied to Pythagorean tuning, where scales can be roughly thought of as a span of perfect fifths. A span of 53 perfect fifths comes so close to closing into a circle, that as far as this drawing goes, it doesn't matter whether we literally draw a scale created by spanning 53 perfect fifths or using 53 equal temperment. See how well the more important harmonics line up with fret locations.

The fret widths drawn were automatically generated based on how close they are in the perfect circle of fifths. Many instruments only include a subset of these frets, using a span of 22 fifths. That leaves a pattern where whole tones are cut into 9 equal parts, where whole tones (from fret 0 to fret 9, a pitch difference of 9/8) have no exact semitone. There is a semitone at either 4 or 5, for high or low semitones. Usually, the large semitone is used, as it more closely matches actual harmonics. When moving from note to note, there are temporary chords of a semitone going on.

When reading ambiguous statements like, "the major third of Ajam needs to be lowered a little bit to be more mellow", the reasoning behind it is much more obvious when the fretboard is at least thought of in terms of 53 equal temperment. In that case, the idea is to make the major third match 5/4.

As a side-note about a common definition of "Sruti", a span of 22 perfect fifths will cause a scale that is very close to 12et to arise; except every note other than the root and fifth will have a doubled partner very close by (roughly distance 81/80 away). Similarly, a span of 17 perfect fifths gives a Pythagorean intonation where sharps and flats are distinct, like split black keys. Then spanning only 12 gives the true Pythagorean piano tuning, with its wolf interval among an otherwise fantastic intonation. Spanning 7 gives a purely intoned diatonic scale, and spanning 5 gives a purely intoned pentatonic scale. 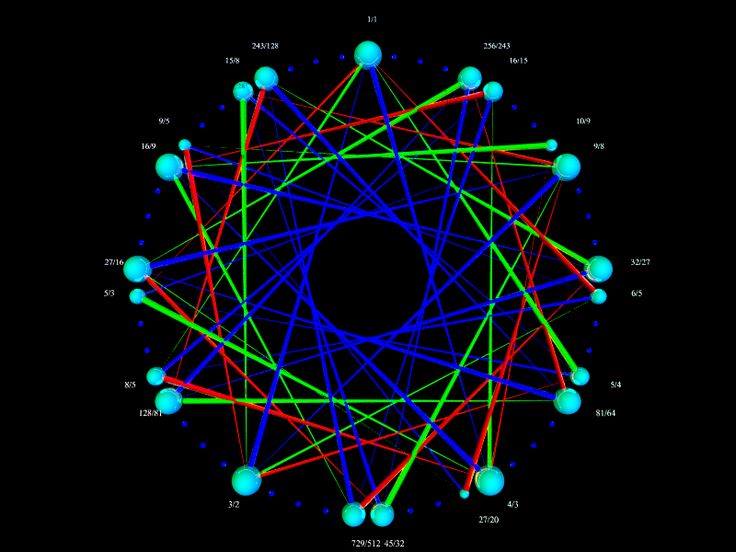 Using this diagram, you can calculate explicitly how to reach a 53et fret by navigating in terms of only fourths, fifths, maj third, min third. The given ratios are just the more obvious equivalent ratios at that location. The point of this diagram is to show that 12et is an approximation of this Sruti span of 22 perfect fifths. And even though it's defined in terms of "3-limit" (pure fifths), it actually contains some "5-limit" (including Just Intonation thirds). And finally, the 53 equal temperment encompasses them both. To some degree, this whole system exists as a side-effect of people playing string instruments with the strings tuned fourths and fifths apart; where the 81/80 pitch drift depending on melodic path is an issue that must be explicitly dealt with. 12et simply equates these close note pairs to make them go away in theory, but this issue still exists physically in the sound; creating a tension between clean chorde timbre (ie: beating) versus having distinct instruments playing from the same pitch set.

Other equal temperments are possible. For practical reasons, 31 equal temperment might be a reasonable upper limit for most fretted and keyed instruments. Just for the sake of completeness, I will include it here. It is well known for being a great choice for triads (major and minor chords). It also doesn't have the 81/80 problem, as it is theoretically derived from a Just circle of major thirds. But note that it's not a great fit for Pythagorean intervals, which is important to support in maqam.

The important pitch ratios are in this (large) image as an octave equivalent ratio oriented pitch wheel.

Based on this, materials and price issues aside, it may be ideal in a microtonal guitar (fretted or unfretted) to: